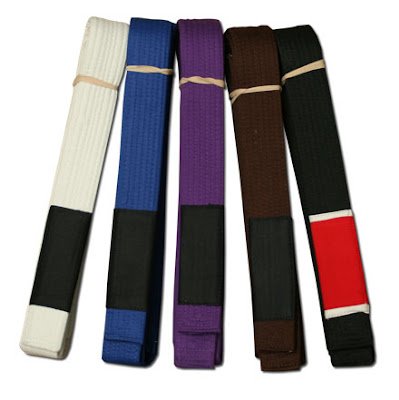 The Brazilian Jiu-Jitsu ranking system awards a practitioner different colored belts to signify increasing levels of technical knowledge and practical skill. While the system’s structure shares its origins with the Judo ranking system and the origins of all colored belts, it now contains many of its own unique aspects and themes. Some of these differences are relatively minor, such as the division between youth and adult belts and the stripe/degree system. Others are quite distinct and have become synonymous with the art, such as a marked informality in promotional criteria, including as a focus on a competitive demonstration of skill, and a conservative approach to promotion in general. 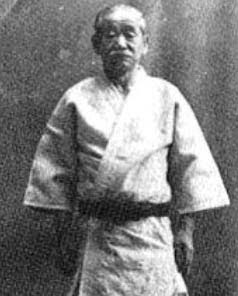 In 1907, Kanō Jigorō, the founder of Judo and the individual who would later dispatch Mitsuyo Maeda on the trip to Brazil that resulted in the development of BJJ, introduced the first use of belts (obi) and gi (judogi) within the art of Judo, replacing the practice of training in formal kimonos.

At the time however, Kanō implemented only the use of white and black belts, with white representing the beginner, as a color of purity and simplicity, and black being the opposite, representing one who is filled up with knowledge.Mikonosuke Kawaishi is believed by many to have been the first to introduce additional colored belts. He originated this practice in 1935 when he began teaching Judo in Paris, France. Kawaishi felt that structured system of colored belts would provide the western student with visible rewards to show progress, increasing motivation and retention.

Kawaishi's adoption of colored belts came only 10 years after Carlos Gracie opened his academy in Brazil. Since then, Brazilian Jiu-Jitsu, Judo, and many other martial arts have adopted the use of colored belts as a way to denote a student's increasing progress.

There have been few published guidelines or standards that determine when a practitioner is ready for promotion, with the criterion generally determined on an individual instructor and/or academy basis. Even the IBJJF, while maintaining an extensive graduation system that takes into account time-in-grade and membership standing, makes no mention of specific performance or skill requirements. When instructors or academies do comment on the criteria needed to achieve the next belt, the most widely accepted measures are:

The amount of technical and conceptual knowledge a practitioner can demonstrate, and;
Performance in grappling (randori) within the academy and/or competition.
Technical and conceptual knowledge is judged by the number of techniques a student can perform, and the level of skill with which they are performed in live grappling. This allows for smaller and older practitioners to be recognized for their knowledge though they may not be the strongest fighters in the school. Brazilian Jiu-Jitsu is a distinctly individual sport, and practitioners are encouraged to adapt the techniques to make them work for their body type, strategic preferences, and level of athleticism. The ultimate criterion for promotion is the ability to execute the techniques successfully, rather than strict stylistic compliance.

Informal versus formalized testingAs noted above, the art of Brazilian Jiu-Jitsu historically has had an informal approach to belt promotions, with one or more instructors subjectively agreeing that a given student is ready for the next rank. In recent years however, some academies have moved toward a more systematic, formalized testing approach. This is especially true for the lower ranks, where the decision to promote is arguably the least contentious.

One of the first instructors to publicly publish some of this formalized testing criterion was Roy Harris, who has formalized promotion tests, up to and including black belt. Formal testing is now becoming common-place in many Gracie Academies as well as organizations such as Alliance. Some Gracie systems have even introduced formalized on-line testing that allows you to become proficient in the art without stepping into the dojo. Formalized tests are generally based around the same elements as a normal promotion, that is, technical/conceptual knowledge and the ability to apply those techniques against a resisting opponent. Some tests however, take other aspects into account, such as a student's personal character or a basic knowledge regarding the history of the art.

Formalized testing may also contain conditions more familiar to traditional martial arts, such as testing fees and a required amount of pre-testing private lessons with the instructor.

Competitions
Students are generally encouraged to compete, as it can play an important and oftentimes accelerating role in a practitioner's growth and overall speed of promotion. Competition allows an instructor to gauge a student's abilities while grappling with a fully resisting opponent, and it is not uncommon for a promotion to follow shortly after a good competition performance. In most academies it is not an essential prerequisite for promotion, but there are exceptions to this and in a minority of schools, competing is not only endorsed but required. 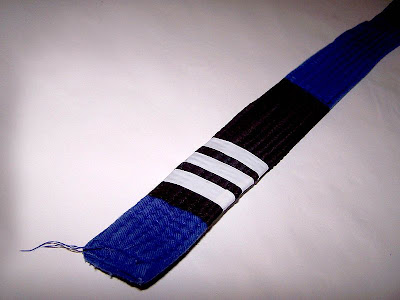 Stripes/degrees
A blue belt with three stripes.In addition to the belt system, many academies award "stripes" as a form of intra-belt recognition of progress and skill. The cumulative amount of stripes earned serves as a rough indication of a practitioners skill level relative to others within the same belt rank (i.e. a blue-belt level practitioner with four stripes would be more adept than a blue-belt practitioner with one, but not a purple belt with one.)

Stripes can be as formal as small pieces of cloth sown onto the sleeve of the belt, or as informal as pieces of electrical tape applied to the same general area. Although the exact application (such as the amount of stripes allowed for each belt) varies from school to school, the IBJJF sets out a general system where 4 stripes can be added before the student should be considered for promotion to the next belt.

Stripes are only used for ranks prior to black belt, after black belt is achieved, the markings are known as "degrees" and are only formally awarded (with time-in-grade being as significant a factor as skill level). Unlike the belt system, stripes are not used in every academy and, where they are used, they may not always be applied consistently.

One long-standing tradition practiced in many Brazilian Jiu-Jitsu schools immediately following a promotion, is a custom known as "running the gauntlet" ("passar no corredor" in Portuguese).

BJJ mild variation of the gauntlet can come in many forms, but generally follows two basic patterns:

The newly-promoted student is hit on their back with belts—once by each of their fellow practitioners—as they walk or run past;
The newly-promoted student thrown by his instructors, and sometimes also by each of the students with equal or higher grade in the academy.
In recent years some have criticized the practice, citing philosophical and even legal reasons, and it is no longer part of some prominent academies. Advocates for the custom argue that "running the gauntlet" serves as a method of team building and reinforces camaraderie between classmates.