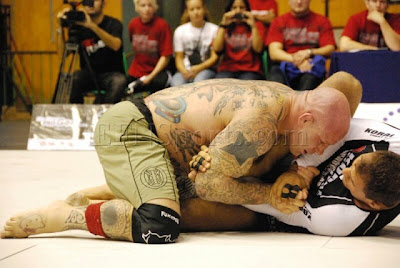 The focus of this article will be to explore the many uses of the half guard position and why it’s so critical to know.

This is especially true when it comes to the fundamental escapes. For instance, when one escapes the mount position the first step leads to the half guard, from there one typically looks to attack or transition further to the full guard. Now, if one has a weak understanding of the half guard the escape would be halted right then and there, and the attacking opponent would move back to the dominate mount position. The same would also be true of the side control position, the back, the turtle, and the front headlock position.

The half guard position has also been a staple for the smaller fighter with shorter legs. For some BJJ players with short powerful legs, the closed guard has been an important aspect of their bottom game. Not that small legs are a disadvantage to the bottom man, but for someone having difficulty keeping their legs locked in the full guard, locking only one leg seems to be much easier. There is one note of caution in regards to the half guard position. Do not sit and wait in this position! It is very easy for the bottom man to lock on to the leg of his opponent and rest. This is a terrible habit to get in and is not what the half guard is designed for. Like every position on the bottom it is important to keep moving and attack always on your back, don’t be lazy in the guard! The take home message being devote considerable time to the half guard position, as it will greatly enhance your bottom game.
Posted by Micah at 08:49